SCHEDULE AN IN-SERVICE OR PRESENTATION

By Law Office of Stephanie Schneider PA on Mar 11th, 2011 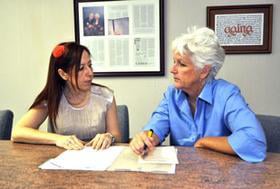 Debra Giblin-Davis, worked with attorney Stephanie L. Schneider, left, to make plans that would protect her son, who has multiple sclerosis.

Debra Giblin-Davis, worked with attorney Stephanie L. Schneider, left, to make plans that would protect her son, who has multiple sclerosis.

Debra and Robin Giblin-Davis were traveling several years ago when they had an epiphany. Both were in their 50s. Sean, the youngest of their three adult children, has multiple sclerosis.

If something happened to the couple, “Sean would be in trouble,” Debra Giblin-Davis said.

So, aside from getting their own affairs in order – putting their estate into a trust and setting up powers of attorney and medical surrogates, in case they’re unable to make decisions for themselves – they sought to protect Sean.

Their attorney, Stephanie L. Schneider of Plantation, suggested a special needs trust. This would protect Sean in the event something happened to both parents – and ensure their intentions among all three kids.

“I see too many people with no documentation, people who have not dealt with issues of mortality,” Schneider said. “It scares them and that holds people back from taking the first step of future planning.”

Florida is in the midst of a continued senior boom. By 2020, aging baby boomers will head to Florida, adding more than 2 million elderly, taking it to near 26 percent of its population, the U.S. Census Bureau notes.

Services seniors and their families seek include drafting of wills and trusts, serving as personal representative and trustee, guardianship, and even probate of estates – though many use trusts as a way to avoid public and costly probate.

Some of the most common services for legal affair planning, for example, include a power of attorney and durable power of attorney, which give legal and financial decision-making authority to a named individual, should the principal become permanently or temporarily disabled or incompetent to make decisions; the designation of a health care surrogate who can make medical decisions; and a living will that states the person’s end-of-life choices.

In the years that he’s practiced elder law in South Miami, Alex Cuello has watched as more senior clients involve their adult children in attorney meetings and decision-making. This helps ensure intentions are clear – and the chance for confusion or disagreement is minimized, he said.

“If you start doing this early on, the kids are prepared for when the time comes and they’re not squabbling over it,” he said. “They’ll know what their parents’ wishes are and they can plan emotionally for what’s coming.”

The older seniors with children grow, the more likely their needs and intentions change, said Joseph Karp, a board-certified elder law attorney. In 1994, a 75-year-old couple worth $1 million entered his office wondering how to ensure their children would pay no taxes on their estate. Still active almost two decades later, they’re asking a different question: How can I make sure this money will last the rest of my life?

“When they came in in 1994, they never planned to be around in 2011,” Karp said. “They don’t feel closer to the grave, but they understand the cost of long-term care and they’re more worried about money.”

Cuello advises senior clients to bring their adult children to their doctor visits, to assign health care surrogates so doctors can speak to the children, and to review documents as the situations change – as children reach 18, for example, or the senior parent’s mental or physical condition deteriorates.

“Planning for this eventuality is important,” Ploucha said, “and should be addressed sooner, rather than later, in the life of a business.”

Debra Giblin-Davis said the couple is comforted knowing their affairs are in order – and Sean is protected.

“Looking back, it’s really wise to do this at any time – to set up your estate and how your kids will be provided for,” she said. “It’s much better to do it sooner, when you’re not in crisis mode or something horrible happens.”